The Ciruli Dashboard: One Year Into First Term

President Trump is consistent. He may shift topics and tone for special occasions, such as Davos and State of the Union, but mostly his style and rhetoric is set and it is reflected in the near unwavering 40 percent approval rating he has had for his first term. He continues to hold 75 percent of self-identified Republicans, but he has failed to expand his base, and as the November 2018 midterm elections loom, losing the House of Representatives becomes more of a possibility.

Trump and the Republican leadership are hoping the roiling economy and tax cut benefits will shift opinion in their direction. And there is some evidence it may, even as Trump’s personal demeanor undermines the good mood. Trump’s approval rating for his economic performance is up 5 points since the new year, even as his overall approval has varied around 40 percent and his foreign policy approval lingers at 36 percent (data from RealClearPolitics.com). 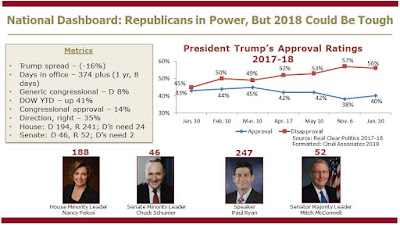