Blue Wave or Just a Ripple?

The recent primaries and national dashboard are sending mixed messages on the blue wave. The presumption, based on history, has been that Democrats should be able to pick up at least the 24 seats they need to retake the House and get the Speaker’s gavel back.

And although President Trump’s approval rating remains historically low, it has improved from last fall when it was at 38 percent (negative 18%).

In addition, the generic congressional spread, which was double-digits in favor for the Democrats last fall, is now 8 points and has been as low as 3 in the last thirty days. 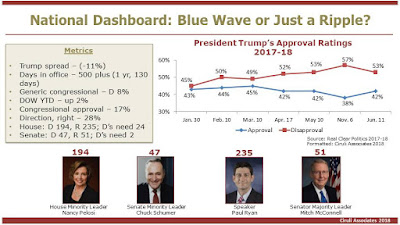 The general sense is that the political environment that so favored the Democrats the last year has shifted to a more neutral position, still favoring the Democrats, but offering them less comfort.

Possibly the best recent poll was conducted by Anthony Salvanto and his team at CBS who are polling in 64 competitive or likely competitive congressional districts. Their latest survey showed the Democrats winning 219 seats, one more than needed to win the House (of course, there is a margin of error). Republicans liked the economy and disliked immigration. Democrats worried about health care and disliked Trump.

The most recent primaries also offered ambiguous signs for Democrats. Although Democrats avoid a lockout in several California congressional districts, in 5 out of 7 they received less than 50 percent of the primary vote, increasing a likely tough race in the November general election.

The conclusion of this analysis is that, as of June 1, Democrats have some modest advantage based on the historical precedence of voters wanting to reign in a new presidency and a highly polarizing chief executive, but the battle for the House will mostly be waged seat by seat.
Posted by Floyd Ciruli at 4:04:00 PM