Mike Pence was all but booed by European allies at the 2019 Munich Security Conference at the mention of Donald Trump, while the news from South Korea and Japan was that Trump deserved the Nobel Peace prize for his North Korean negotiations.

The difference in leadership views of Trump mirrors differences in European and Asian publics. Respect and approval of Trump and the U.S. could hardly be lower in Europe, even by today’s tough standards, but public opinion in South Korea and Japan is substantially more favorable.

The latest Pew Research poll of October 2018 shows Japan and South Korea are much more favorably disposed toward the U.S. than Germany and France. And, although the publics of the four nations have low levels of trust for President Trump, they have collapsed in Germany and France. 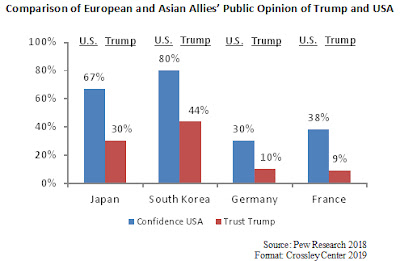 Trump’s behavior toward European and Asian allies explains some of the differences as do the responses from top leaders. In Europe, Trump, with his usual undiplomatic behavior, has criticized the EU and praised Brexit, promoted withdrawal from NATO and his hostile approach toward immigration. After more than a year and several meetings of Trump’s boorish behavior, President Emmanuel Macron and Chancellor Angela Merkel have dropped the usual language of diplomacy used with allies and criticized Trump and U.S. policy with harsh language and increasing volume. Whereas in Japan and South Korea, facing many of the same controversies with Trump, such as tariffs and trade deficits, commitment to stationing forces and the cost, and multilateral agreements, such as TPP, leaders have maintained a friendly demeanor.

Of course, the nearness of the threats in terms of time and space and the lack of an alternative deterrent to America’s are important factors shaping elite and public opinion.
Posted by Floyd Ciruli at 2:09:00 PM