Trump’s Tariffs Take a Toll: Dow Ended May Below 25000

The Dow and other major investment indexes had their worst month since the collapse of major indexes last December. The Dow lost 355 points on Friday, the last day of May, after President Trump’s tariff announcement on Mexican goods.

Although the Dow remains up 6 percent for the year, the preceding six weeks of losses is the longest losing streak since 2011, near the start of the current recovery. Along with concern about the longevity of the nearly decade-long recovery (started in 2009) and bull market, investors are beginning to fear Trump’s application of emergency trade power for his wildly oscillating tariff policy. Earlier in the month, Trump lifted tariffs on steel and aluminum (while threatening new tariffs on autos), then raised tariffs on China as trade talks failed, and now is calling for escalating tariffs on Mexico (via Twitter and against advise of trade experts and legislative allies).

Trump and his immigration hardliners, such as Mick Mulvaney (Freedom Caucus leader and White House Chief of Staff) and immigration staffer, Steve Miller, have encouraged the crackdown on the Mexico/U.S. border, most recently with complete shutdown. Arguably, tariffs are somewhat less disruptive, but for many investors they reinforce the cross-purposes and volatility of the President’s foreign and economic policies. Tariffs are a tax on Americans and wildly disruptive of trade relationships. Economic observers not associated with the White House believe Trump’s policies will hurt earnings, inhibit business investments, raise consumer prices and slow growth. 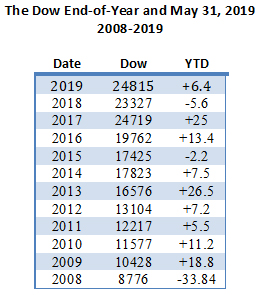 Most observers expect the volatility to continue due to geopolitical factors, both in the U.S., but also abroad. The President’s use of sanctions and tariffs is a new factor for world markets to digest.
Posted by Floyd Ciruli at 9:44:00 AM