With less than 50 days to November 3 and only a few weeks until ballots arrive in Colorado (October 9), the National Dashboard of Donald Trump’s and Joe Biden’s positions have not moved significantly since mid-April. Biden still leads in the head-to-head and Trump still maintains his mid to low 40s approval rating as he has for most of his term.
As of September 15, post the two conventions and more than a week after Labor Day, polls continue to range around the same averages in spite of a variety of astounding news with The Atlantic article accusing the President of denigrating the war dead, the Bob Woodward book accompanied by tapes of interviews with Trump, and more protests and violence in American cities. Also, both candidates are now going into battleground states – the President with his raucous rallies and Biden with masks, small groups and Zoom. 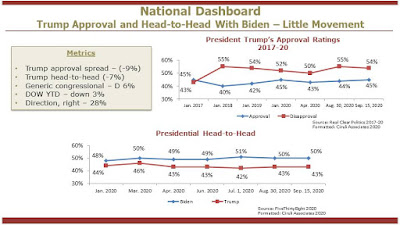 The President’s current disapproval at 54 percent and a negative 9 points is slightly better than two weeks ago, but the head-to-head spread remains a similar 7 points, down from 8 to 10 during the summer, but still substantial.
Trump is betting, as the virus recedes in the news and some level of normalcy gains traction, that his law and order theme and the economy will work with swing voters and late deciders for the final advantage. The numbers remain close enough to make the theory plausible, but early voting is starting and the numbers have been stubborn.
Posted by Floyd Ciruli at 3:25:00 PM