Americans Say Russia Will Attempt to Disrupt the Election

Most Americans (75%) believe “Russia or other foreign governments” will attempt to influence our election this November. The percentage of the public concerned about Russian or other interferences has increased by 8 percentage points the last two years, up from 67 percent in the 2018 election. 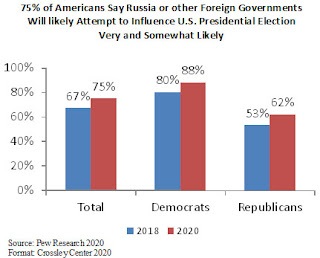 According to Wray, Russia is using social media, proxies, state media and online journals to sow "divisiveness and discord" and "primarily to denigrate Vice President Biden and what the Russians see as kind of an anti-Russian establishment."