The public’s view on the positive contributions of higher education to the “way things are going in the country” has declined in the last seven years. Republicans in particular have turned negative on colleges’ and universities’ contributions to the country.

Decline of the Public’s Views
The public’s opinion of colleges’ and universities’ positive contributions has declined from 61 percent in 2010 to 55 percent this year. Much of the decline began in 2015. The public’s negative views increased 8 points during the last 2 years. The data was reported from a Pew Research poll released July 10, 2017. The poll was conducted with 2,504 adults from June 8-18, 2017. 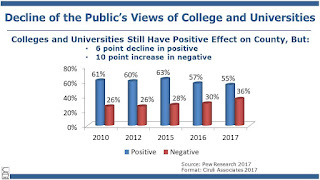 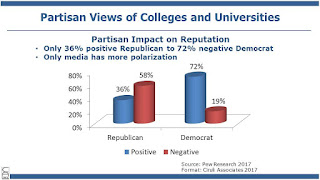 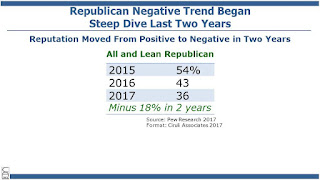 News organizations have reported numerous stories with a negative slant toward higher education in recent years. The high cost of college, student debt loads and low graduation rates have been well covered. Recently, and of more interest to Republicans, have been stories frequently reported in conservative news sites of campus disruptions, takeovers of administrator’s offices, student protests of conservative speakers and an assertion of weak faculty and administrative responses. And, of course, conservative commentators often point out college communities’ consistent voting majorities for Democratic politicians.

Churches are slightly ahead at 59 percent, but labor unions (47%), banks (39%) and the news media (28%) are behind colleges and universities. 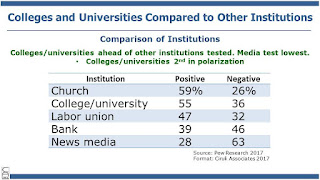 The reputation of colleges and universities is still high, but they face a host of challenging issues. The perception of higher education’s contribution to the country is important to its reputation and effectiveness, and although the recent decline is understandable, the key underlying issues need to be addressed.
Posted by Floyd Ciruli at 3:06:00 PM