DU and CU Are Highly Favored in Denver Metro Area

Overall Favorability
In a voter survey conducted by Ciruli Associates in 2016, DU received a 41 percent “very favorable” rating, followed closely by CU with a 37 percent “very favorable” rating. The total favorability ratings (combining “very” and “somewhat” favorable) were 74 percent and 73 percent, respectively. A few more people were unable to rate DU (22%) CU than (18%), and CU had a slightly higher negative rating (9%) than DU (5%).

County Ratings
One difference in perception of the two universities was their rating within individual counties in the seven-county metro area. Some of the variation is explained by differences in public awareness of the institutions and different negative ratings. DU had a 9-point negative rating in Adams and Denver counties. It was not well-known in Boulder (38%) and Douglas (32%) counties. CU had a high negative in Douglas County (19%) and was not well-known in Jefferson County (26%). 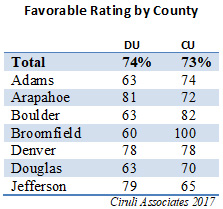 Partisan Ratings
Although there was a partisan difference, with Democrats more favorably disposed than Republicans, both institutions received high favorable ratings from each party.

Comparison with Other Organizations and Leaders
In comparison to other organizations and leaders in the metro area, the schools were in the high middle range of favorability. They were not as high as major cultural facilities, but higher than some sport teams and the Governor. 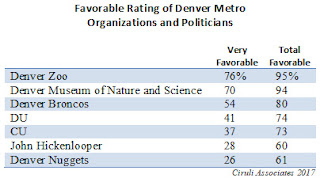 Both schools are well thought of during a time in which the public has generally low trust and confidence in most institutions.

The telephone survey was conducted by landline and cell phones with 600 voters in the seven-county Denver metro area in May 2016 by Ciruli Associates.
Posted by Floyd Ciruli at 1:43:00 PM