The Shutdown. A Debacle for Trump Based on Wrong Assumptions.

As we point out in The Buzz on January 17, “Is the Wall and Shutdown a Winner for Trump and Republicans?”: 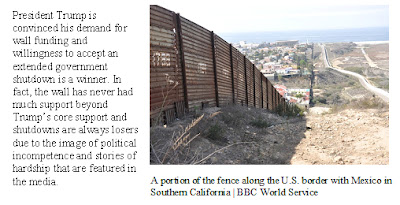 And indeed, missed paychecks among military, such as the Coast Guard; law enforcement, such as TSA, FBI and others; and finally the looming shutdown of the air traffic control system, convinced a very stubborn president that he had a losing strategy.

Misjudging the ease by which he could sustain a shutdown in terms of lost popularity and allies, Trump also misjudged the impact of the midterm elections and the determination of the new Democratic House of Representatives to stop him. He was convinced (and still apparently is) that Democratic House members were going to break from their leaders in the face of constituent hardship and demand a counteroffer with wall funding. In fact, during the last days, it was vulnerable or independent Republicans who broke for opening the government.

While Trump may denigrate polls (and yet still tout those that make him look good – far and few between), it was a wave of polls after mid-January that convinced all of rational, or at least calculating D.C. denizen, that Trump’s third assumption was also wrong. His Oval Office address, visits to Texas borders and endless statements of the threat to national security failed to move public opinion. The wall was still unpopular with the majority of the public. He was being blamed for the shutdown, which was far more unpopular than any crisis on the border, and getting worse every day. 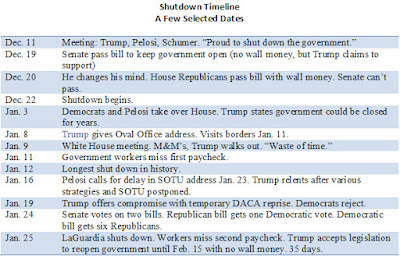