TABOR Override Below 50% in Adams County

The statewide TABOR override is in a close contest among Adams County likely voters. The Proposition CC labeled, “Retain revenue for education and transportation,” has 44 percent in favor to 40 percent opposed in a recent Ciruli Associates poll among Adams County likely November voters. It is below 50 percent, with two-fifths of voters already in opposition. In recent weeks, Democrats, i.e., legislators, recognizing the vulnerability of the proposition, have mostly abandoned it. And, indeed, the poll indicates initial Republican voter opposition (68%), which is likely to grow. Unaffiliated voters are leaning slightly against. 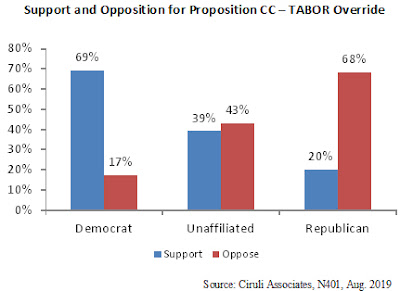 Opposition has already ramped up with attack ads appearing online. Republican leadership, realizing the tax implications of the proposition as a tool for a party in need of a rallying theme, has gone all in to oppose it.

Democrats gave the proposition a major public relations lift in the ballot titling. They started with a disclaimer about raising taxes, listed the programs benefitting, claimed the budget will remain balanced and offered an annual “independent” audit.

Proposition CC: Retain revenue for education and transportation
WITHOUT RAISING TAXES AND TO BETTER FUND PUBLIC SCHOOLS, HIGHER EDUCATION, AND ROADS, BRIDGES, AND TRANSIT, WITHIN A BALANCED BUDGET, MAY THE STATE KEEP AND SPEND ALL THE REVENUE IT ANNUALLY COLLECTS AFTER JUNE 30, 2019, BUT IS NOT CURRENTLY ALLOWED TO KEEP AND SPEND UNDER COLORADO LAW, WITH AN ANNUAL INDEPENDENT AUDIT TO SHOW HOW THE RETAINED REVENUES ARE SPENT?

The Ciruli Associates polling question was more modest and straightforward in its description:

Proposition CC is a TABOR override to retain state tax revenue to fund public schools, higher education, and roads, bridges and transit. Do you favor or oppose the proposition to allow the state to keep and spend all the tax revenue it annually collects instead of the current requirement to refund the money to taxpayers?

The poll was conducted August 6-9, 2019, with 401 likely November Adams County voters (the area poll represents 77% of county), with plus or minus 4.9 percentage points.

The public tends to favor local TABOR overrides, but this one is for state government, which seldom has much voter support for tax increases, and Democrats made it permanent. The November 2019 turnout will be smaller, older and more conservative.

A couple of questions to ponder: