Elizabeth Warren is now second in Iowa, newly ahead of Bernie Sanders and second in the RealClearPolitics national average.

Sanders, who remains ahead in fundraising and number of donors, has his hardcore 2016 supporters, but Warren has the momentum. Sanders, realizing his campaign had stagnated after the first debate, rebooted to a bigger commitment to Medicare for All and a more forceful presence in the second debate. Unfortunately for him, the debates may limit the field, but a good performance has only rarely moved many Democratic voters. And, of course, Warren was also judged to have performed well in both debates.

Notice the other changes in the Iowa line-up. Tom Steyer now makes the top 7 list at 2 percent. He also in on the list in New Hampshire. Not only is Warren ahead of Sanders in Iowa, but Kamala Harris is tied, and Amy Klobuchar replaces Beto O’Rourke from his national sixth position. 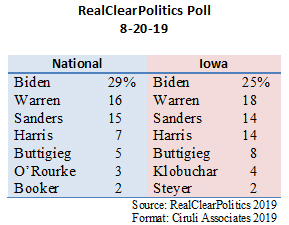 One of Sanders’ strengths is his consistency of message, even if it is three years older and about a century out-of-date. But, it is being overshadowed by Warren’s plan a week for America’s ills. And Sanders’ Medicare for All, which has never been very popular with the general public, is increasingly seen as flawed due to the party moderates attacking it as inimical to private insurance, massively expensive and politically impractical. Sanders, of course, was hoping to be the main foil to the Democratic establishment’s centrist, Joe Biden. And now, he’s being forced to share the platform with Warren and face a stage full of critics.