In a recent poll conducted by the European Council on Foreign Relations, Europeans in 11 democracies expressed major reservations concerning America’s political stability and dependability as an ally. A majority (61%) of the population believe the U.S.’s political system is broken and a third of Europeans don’t think they can depend on the U.S. for defense (53% of Germans). Very importantly for the Biden administration, Europe believes China is on the rise and they should be neutral between the rising U.S. and China competition.

When media, academic and political opinion leaders are asked why the huge distrust in the American system, they cite the circumstances around the 2020 election, the system’s general gridlock and the chance in 2022 conditions could get even more fractured. The question one hears most often is: How could Donald Trump, after his track record, get 74 million votes? 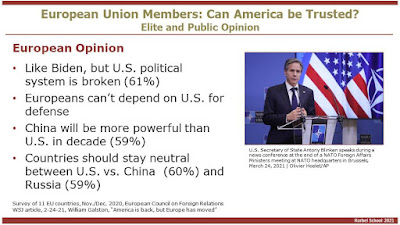