Former President Trump made clear in actions and statements that he did not like Angela Merkel, chancellor of the Federal Republic. His public criticism began early in the 2015-16 campaign over his views of her poor handling of immigration. And, it continued into the administration with numerous references to his long-term belief Germany was a NATO defense freeloader and taking advantage of the U.S.’s friendship on trade. He believed European unity was more an economic threat than security benefit. His penchant for hyperbole and opposition to the German-Russian gas pipeline led him to argue that Germany was controlled by Russia. Interactions with Merkel tended to range from perfunctory to rude from White House visits to G-7 summits. It finally led the normally diplomatic and cautious Merkel to announce that Germany and Europe need to begin to think beyond depending on the U.S.

Not surprising, the hostility affected public opinion. In a series of European-wide polls, Germany consistently scored the least favorable toward the U.S. For example, more than half of Germans believed “Americans can’t be trusted” (53%) and 73 percent believed the U.S. needs major reform.

Although President Biden and Secretary of State Blinken are dedicated to restoring trust and rebuilding the partnership, and there is residual good will in Germany, a great deal of damage was done. 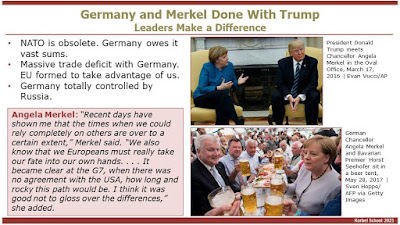 View a more detailed political account on the discussion of what our European allies now think of America at an April 21 event sponsored by the Crossley Center for Public Opinion Research, the Josef Korbel School of International Studies and the University of Denver’s Political Science Department.