Colorado to Get a New Congressional Seat. Where Will it Land?

Mark Harden in Colorado Politics reports that Colorado is one of the six states expected to pick up a House seat after the decennial census in 2020. It won’t affect the 2020 presidential electoral distribution, but the next Trump-like candidate will have fewer electoral votes in Michigan, Ohio, Pennsylvania and West Virginia to depend upon, but more in Texas, Florida and North Carolina. 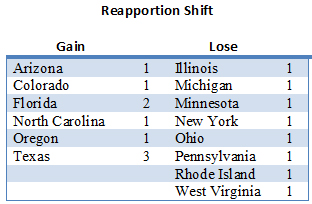 Colorado’s Front Range has been in a rapid growth mode this decade and will likely get the most benefit of the new seat, but the configuration of all seven existing seats will change.

The fastest growing metro counties of Adams, Arapahoe and Douglas should see an increase in representation, but Denver, Larimer and El Paso have also been rapidly growing and can expect to be in the competition for a piece of the eighth seat. 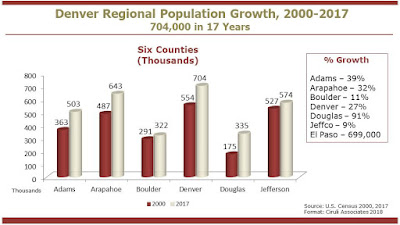 In November, Colorado voters will decide upon a new, less partisan procedure to reapportion the state. But regardless of the system, the interests of incumbents, new aspirants, counties, cities and communities of interest will be in fierce competition. 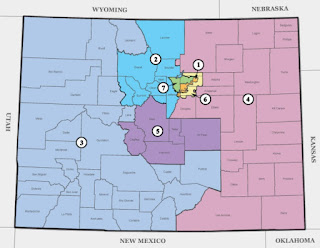 Assuming Colorado’s growth continues at the current rate, another 140,000 residents can be expected between now and the 2020 census, raising the total population to 5.8 million. That would create eight House districts of about 730,000 persons in each. In 2020, the seven existing House districts would average 829,000 residents in each. According to 2016 census estimates, the 1st CD (DeGette) and the 6th CD (Coffman) had the largest populations and the 3rd CD (Tipton) the least, but all seven districts will need to shed upwards of 100,000 residents to create the new district.
Posted by Floyd Ciruli at 9:33:00 AM