National Dashboard: Consensus Builds, Democrats Have Momentum for a Majority

After a dilatory spring when polls and signs were weak (see “Blue Wave or Just a Ripple”), Democrats have regained the momentum for retaking the House of Representatives. In fact, even Mike Coffman’s seat is now rated a toss-up with a Democratic lean by Nate Silver’s 538.

Some of the data: 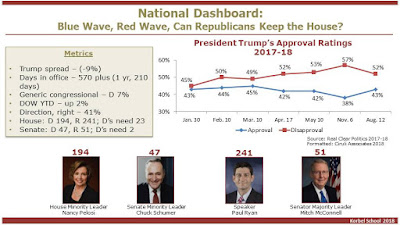 This also is an especially tough year on incumbents. The President is better at primaries
than general elections and at dividing his party than defending it, so an establishment
incumbent suffers from both being associated with a controversial president and possibly
not having his full support.


Many Republican supporters of the President (although few in the Republican establishment and officeholders) have taken to accept the analyses and argue losing the House will be good for the President’s re-election. He will win voter sympathy, like Bill Clinton in 1998, as the Democrats ramp up multiple investigations and impeachment.

But, the President doesn’t agree. He has committed to 40 campaign appearances this fall. He believes he can personally hold the Republican House. That’s a good call because, in fact, loss of the House will be a very negative judgement on his first two years, mostly end any legislative accomplishments, drain his political power and embolden the Republican establishment to start putting distance between him and their careers.
Posted by Floyd Ciruli at 9:50:00 AM