Abortion is a key issue in the looming Supreme Court replacement vote, and Americans oppose overturning Roe v. Wade by 71 percent in the latest NBC News/WSJ poll. Although it may not keep Judge Kavanaugh from 51 Republican votes and confirmation, it sends a warning to Republican congressional and senate candidates who will be campaigning in swing districts and states. Abortion is a very polarizing issue.

Kavanaugh’s own pre-confirmation favorability is weak. About a third (32%) of voters support Kavanaugh’s nomination and 26 percent oppose it, a net positive of 6 points. Similar, but lower than Neil Gorsuch’s net 12 points in 2017. Abortion is one of the issues that will help shape opinion about the new judge.

It could also produce a crisis of public opinion for the reputation of the Supreme Court, which has managed to hang onto some modicum of credibility in these polarized days. Currently, the assumption is that fidelity to “precedent” or “stare decisis” will be sufficient to buffer a judge who believes Roe v. Wade was wrongly decided. And, the informed public tends to believe even a pro-life majority will continue to decide abortion cases around the margins of more allowances for restrictions or less tolerance for state support. But, a powerful hostile reaction lurks if a direct assault is made and abortion loses its constitutional protection. 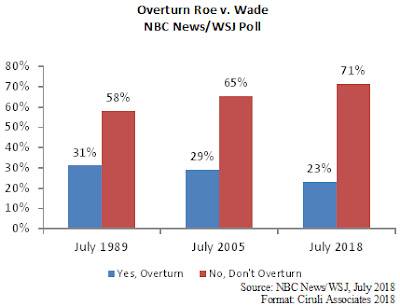 Support includes: 88 percent of Democrats, 76 percent of independents and 52 percent of Republicans.
Posted by Floyd Ciruli at 1:14:00 PM