Biden Advantage in Electoral Vote; Handful of States Will Decide

Referenced in every commentary, reinforced by 2016, is that the national popular vote is not the deciding factor in the presidential race, rather the election will be decided in a handful of battleground states. But as Joe Biden’s recent acceleration in the national polls shows, an 8- to 10-point advantage nationally tends to translate to winning percentages in most swing states. In fact, it tends to add states to the list. 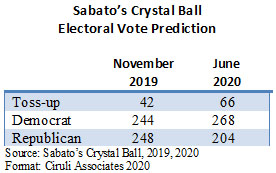 The campaigns mainly agree with the listing, with heavy advertising in the toss-up states and the Trump campaign expanding into newly vulnerable states he won in 2016, such as Iowa, Georgia and Ohio (see the two maps below). 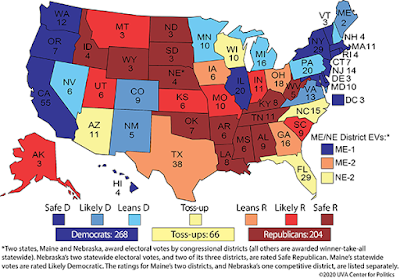 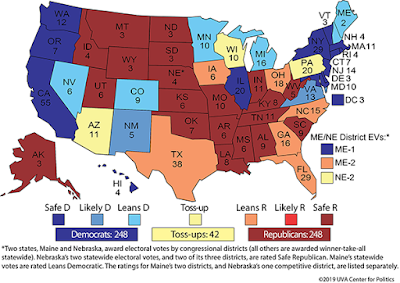 The shifts from earlier this year to the new July map reflect a month of polling that reports Joe Biden ahead by 8 to 10 points over Donald Trump, with most swing states having Biden leading by 3 to 6 points. The shifts include Pennsylvania and Michigan moving out of “toss-up” to “lean Democratic” and Florida, North Carolina and Nebraska’s 2nd District moving from “lean Republican” to “toss-up.”

Two of the other most frequently cited prognosticators have just updated their Electoral College projections and they give Biden even bigger leads. The Cook Political Report of July 14 describes 72 toss-up states and 279 electoral votes for Biden and only 187 for Trump. Their toss-up list is Georgia, North Carolina, Florida, Arizona and Maine’s 2nd congressional seat. They list possible additional Trump losses if the campaign doesn’t right itself in Iowa, Ohio and Texas. Cook cites Missouri, Michigan, Pennsylvania, New Hampshire, Wisconsin and Nebraska’s 2nd congressional seat as states that lean Biden, but could shift.

Nathan Gonzales and Stuart Rothenberg produced a July 17 report (Inside Elections) projecting Biden ahead of Trump 319 to 187, respectively. Well over the 270 needed for election. They have named four states – Arizona, Florida, Wisconsin and Nebraska’s 2nd District – from “toss-up” to “tilt Democratic.” They moved Georgia and Maine’s 2nd District from “lean” and “tilt Republican,” respectively, to “toss-up.”
Posted by Floyd Ciruli at 11:01:00 AM