In November 2019, I prepared four scenarios for the November 2020 election with the “Status Quo,” that is, president reelected with the Senate remaining Republican and the House Democratic as most likely of the four (Four Scenarios: Republicans’ Best Endgame and Democrats’ Possible Sweep).  The economy was booming, only six states were in play and Democrats in an ugly nomination fight. 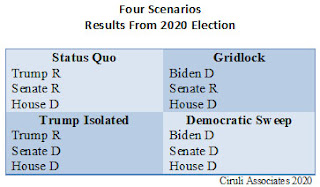 But eight months later, the political environment shifted 180 degrees and a “Democratic Sweep,” a longshot last November, is now the most likely scenario – Trump loses and takes the Republican Senate down with him. “Gridlock,” which was second most likely in late 2019, has receded because Joe Biden is running so strongly in swing states, many of which have senate races, which dramatically increases the possibility Democrats will pick up the senate with the presidency. In general, presidents who run especially strong can pull the senate in with them, and Biden is competitive or ahead in Arizona, Colorado, North Carolina, Maine, Georgia and Iowa. Democrats need four states and will have to nearly run the states with wins in North Carolina and Maine.

The “Democratic Sweep” scenario has surged as a possibility due to polls showing Biden up 9 points 100 days before the election (see table below). Mostly importantly, he is ahead in most of the primary battleground states – Arizona, Florida, Michigan, North Carolina, Pennsylvania and Wisconsin. 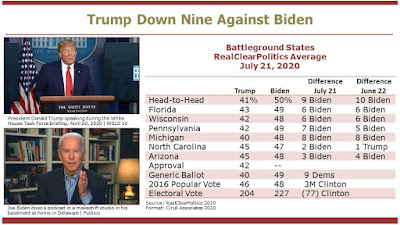 Trump’s approval is a near record low at 42 percent and the generic ballot test has Democrats up 9 points (it was 7 points in the 2018 when the Democrats retook the House).

See blog:
Trump Behind Nine Points for Entire Month
Posted by Floyd Ciruli at 10:15:00 AM