Thursday was a new low point for Donald Trump’s campaign. The President had to bow to reality – a new strategy – and cancel his long-sought massive re-nomination rally, most recently relocated in what was more politically friendly Florida.

The admission of defeat was accompanied by a spate of new polls that showed key battleground states were slipping away from Trump, including his home state Florida. In Michigan, Trump is down 9, Minnesota down 13 and Pennsylvania down 11 points. In the Fox polls, Trump is running behind his 2016 numbers and his current job approval numbers. 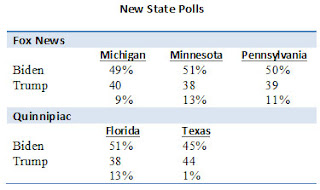 The Florida poll from Quinnipiac is especially ominous given the President just had to bail out of his convention due to the surge in the COVID-19 virus and the state is a must-win for Trump’s reelection. He is behind Joe Biden 13 points. Most Floridians also believe Governor DeSantis opened the state too quickly (61%) and that the virus is now out of control (76%).

Quinnipiac just published a Texas poll that showed the presidential race within one point.
Posted by Floyd Ciruli at 11:53:00 AM