Battlegrounds: Millions are Being Spent in Battleground Advertising. Are the Numbers Starting to Move?

In the last month, there has been little movement in the battleground numbers, even with millions in advertising expenditures from the Trump campaign. The state polling numbers in 2020 are more reliable with multiple polls conducted by national media outlets.

The President improved his position by a point in Arizona and Michigan, two points in Florida, and his biggest gain of four in North Carolina, going to three points for Biden to one for Trump. He lost a point in Pennsylvania and Wisconsin. I’ve added Ohio to the watch list. Trump won it by 8 points in 2016 and is now behind by 2 points. 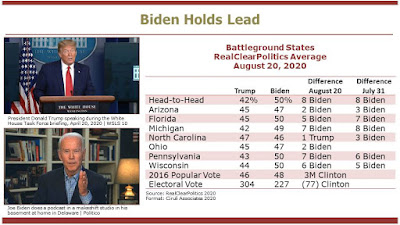 Out of the seven states on the battleground list, three are within the margin of error (typically ±3 points). This remains a close race that will likely be fought through Election Day, and this year, like 2000, possibly after Election Day.
Posted by Floyd Ciruli at 9:30:00 AM