Examining the National Dashboard from the last post on July 28 shows little change in the presidential race. As the Democratic National Convention begins, the Democratic presumptive nominee, Joe Biden, is 8 points ahead of Donald Trump. The convention appeared to get initial good reviews. The polls have been frozen in a narrow range and it will be surprising to see much of a bounce. And, of course, the Republican Convention begins next week and may receive its own bounce.

Trump’s approval rating remains at 42 percent in spite of repeated polls showing he has lost the COVID-19 management and the race relations issues by more than 20 percent. He does win approval on the economy, but it hasn’t helped yet. His highest approval this year was after impeachment and before the virus. It’s not clear how he gets back to that number.

Most professional pollsters and campaign consultants believe the race will tighten, especially after Labor Day. In fact, the race has closed by one point if July 1st is used as the baseline. 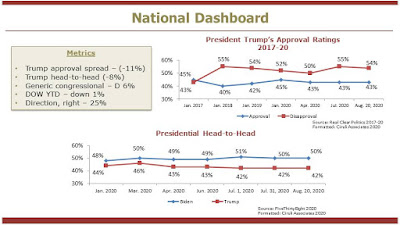