Since the start of the Trump administration, German and American public opinion concerning the relationship between the two countries has diverged dramatically, creating a challenge, but also an opportunity for President-elect Joe Biden to improve the relationship. Pew Research reports Germans overwhelmingly believe the relationship is bad (79%; 12% very and 67% somewhat) whereas Americans tend to believe that as they did in 2017 the relationship is mostly good (74%; 19% very and 55% somewhat). The American view has not varied, but German public opinion dropped dramatically as President Trump strongly criticized the European Union, the U.S.’s traditional allies, and specifically Germany and its chancellor, Angela Merkel. 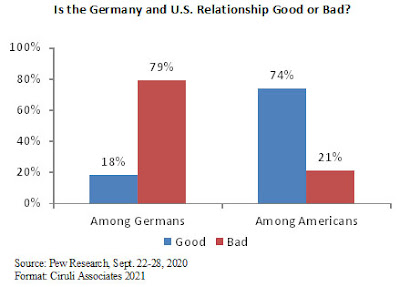 Pew cites Germans’ poor regard for President Trump and the country’s handling of the coronavirus. Also in a series of other questions, there were 9 significant divergences between the U.S.’s public view concerning the efficacy of the partnership between Germany and the U.S. For example, only 12 percent of Germans saw the U.S. as a partner for “protecting the environment,” 35 percent on “promoting free trade,” 28 percent on “dealing with China,” and 38 percent as a partner for “protecting democracy and human rights around the world.”

Reinforcing Biden’s challenge, a Gallup Poll reports in a 29-nation survey of December 2020, the poor regard of the U.S. leadership is shared among other top allies, including France and the UK. Fortunately for Biden, China’s image in 2020 has also dropped from a modest median of 22 percent approval in 2019 to a new low of 17 percent in 2020. The U.S. median job performance is 18 percent. In contrast, Germany’s approval rating among the group of countries is 62 percent.