After four years of challenges to the rules of American democracy, Donald Trump finally crossed a line as an angry mob he helped assemble and incited breached the U.S. Capitol in an effort to disrupt the Congress’ formal counting of the Electoral College votes. 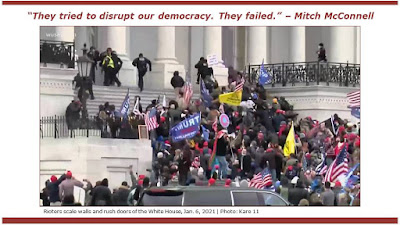 It was a day of clarity for the Republican Party, who finally recognized the political consequences of Trump’s behavior long after the moral effects had been obvious. In the strongest break from Trump since the election, Mike Pence and Mitch McConnell forcefully condemned the violence and insisted the certification continue and Lindsay Graham declared, “enough is enough,” “the election is over” and Joe Biden’s the president. Of course, it took Mitt Romney to describe the day fully: “What happened here today was an insurrection incited by the President of the United States.”

An even more direct blow to the Republican Party was the twin wins for Democrats in the Georgia senate race declared late Tuesday and early Wednesday. McConnell and the party are now in the minority and most observers believe the loss is the responsibility of Trump’s months-long attack of the transition of power. As Trump began his term, Republicans controlled all three branches of government and now they have none.

Trump grudgingly admitted defeat early Thursday and pledged an “orderly transition.” He added his usual overstatement: “While this represents the end of the greatest first term in presidential history, it’s only the beginning of our fight to Make America Great Again!” (via Dan Scavino on Trump’s Twitter, one of the last aides available). This event will encapsulate his term not as the greatest, but as one of the most damaging.