Donald Trump has managed to transition an election defeat into an impeachment by the House of Representatives, with support from a majority of the public and ten House Republicans. The President always likes superlatives, and this transition has been an extraordinary disaster, or as he would say, “the greatest of all time.” 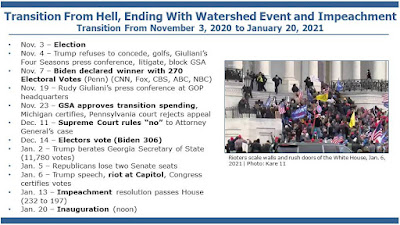 Of course, the insurrection on January 6 and Trump’s involvement in it was the watershed event that hit Congress and the American people like Pearl Harbor and 9/11. Also, Trump’s contribution to the loss of the Senate on the January 5 Georgia election has Republican leadership and rank and file beginning to question their lockstep partnership with him.