President Trump has run into checks and balances, not just the constitutional restraints built into the system, but the full-range of limitations on executive actions that are part of the American political culture. From the Judiciary (9th Circuit), to Congress (Freedom Caucus), to his cabinet contradicting with him and the permanent bureaucracy leaking, to our foreign allies disagreeing him, the media’s intense coverage and even polls.


Donald Trump appears to realize how much more difficult the political system is compared to what he’s used to when he told Reuters last week, “I thought it would be easier.” And the AP, “I didn’t realize how big it was…every decision is made harder than you normally make.” Not quite the same as commercial real estate.


The President has come to see how complicated many policies are. He has referenced the complexity of health care and the Korean stalemate after listening to President Xi’s description of China’s relationship and history with North Korea.


One typical reaction of most politicians is to blame the rules. And Trump has called congressional rules “archaic,” and in his view, the filibuster needs to go. The White House is floating breaking up the 9th Circuit and changing liable laws.

But another reaction is to adjust. And so NATO is no longer obsolete; China is not a currency manipulator. Janet Yellen is beloved and respected and NAFTA should be negotiated not terminated. 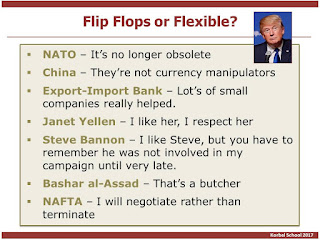 We do not know the back story of many of these shifts. Some may just be reversals of Trump’s penchant for not well-thought-out declarations. But many reflect advice and experiences that show a White House and President dealing with very complex problems in a not always friendly world. His critics call them flip-flops, he calls it flexibility.