First round of French elections Sunday produced a result predicted for several weeks by French pollsters, even though the last few days of polls showed a very close race.

The run-off election is May 7, and pre-election polls show any of the top three candidates would beat Le Pen. Macron was the strongest at about 60 percent and 40 percent for Le Pen. French pollsters published their final pre-election polls on Friday, April 21. They then release a final poll on Election Day. 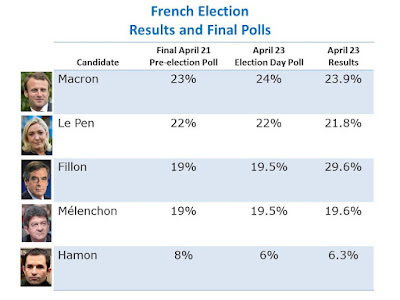 The five candidates represented 91 percent of the vote.

Although the pollsters nailed it, France’s politics is wide open. Le Pen’s campaign may have stalled from its showing earlier in the year (28%), but the anti-EU populist candidates still attracted nearly half of the vote. And the two major parties – the Socialists and Republicans – are in collapse. Hence, French politics is dominated by outsiders without identified governing majorities creating possibilities for significant change or massive gridlock.

Like recent elections in most Western democracies, there was significant division between the urban and more rural vote. Le Pen received about 5 percent of the vote in Paris and Macron 35 percent. Contrary to Donald Trump’s view, the final terrorist attack did not surge votes to his favorite candidate, Le Pen.
Posted by Floyd Ciruli at 3:37:00 PM