ABC/Washington Post, NBC/Wall Street Journal and Gallup released polls over the weekend that showed President Trump has failed to improve his poor approval rating during the first 100 days. In fact, his ratings declined after a weak start and remain in the cellar.


Although Trump cherry picked a couple of positive numbers, he declared, in general, they were “fake news.”


Unfortunately for the poll sensitive President heading into his 100-day report card, more than half the public disapproves of his performance, and his approval at slightly more than 40 percent is below even the weak general election vote he received (46%). Of the biggest concern among national Republican leaders is the flat trend line, even with a White House receiving saturation coverage and a few popular items being accomplished, including the Neil Gorsuch confirmation and the missile strike against President Assad in Syria. 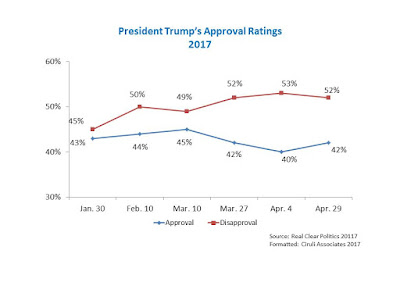 Although Trump holds his core base of voters, they are less than a third of the total electorate. His other advantage at this point is the Democrats are even less popular than Trump and Republicans.