French Nationalism Hits a Wall: Not Good News for Putin and Trump.


She and her party, the National Front, have long- and well-established ties with Vladimir Putin. They have received loans from Russian banks, she opposed Russian sanctions and she was pictured with Putin in a highly public visit in February. Macron repeatedly claimed Russia’s propaganda and anti-democratic machine was trying to damage his campaign. They are suspected to be responsible for the final hack of Macron’s campaign communications. 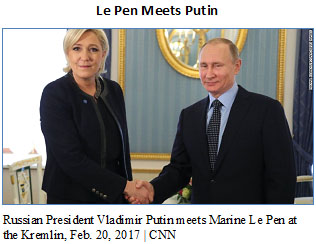 Ms. Le Pen at a conference in January in Germany joined her fellow nationalists to celebrate Donald Trump’s victory and his Steve Bannon-inspired Inaugural address. Most recently, she expressed reservations about Trump’s policies in Syria (interventionist, anti-Russia), but Trump was clear in his preference with his unsolicited tweets. 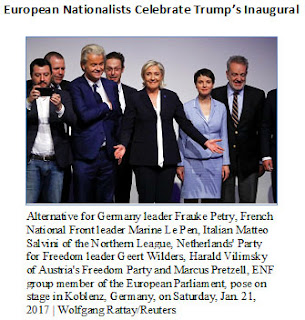 Behind the scenes, Bannon has been a fan of Le Pen and strongly supports the nationalism movement across the continent. Trump has been strongly pro-Brexit, predicted more withdrawals from the EU and hails as his good friend Nigel Farage, the Brexit leader, in Great Britain.


Ironically, Trump’s poor international image and “America First” pronouncement and policy are damaging his goal to help nationalist allies. In fact, Trump’s “America First” and generally anti-EU, anti-NATO rhetoric and behavior, which is as heavily reported on in the continent as here, contributed to the consolidation and support for center left, pro-EU candidates.


Russian elites, at some point, may conclude Putin’s strategy of cyber and propaganda warfare with the West is counterproductive.
Posted by Floyd Ciruli at 2:48:00 PM