Donald Trump’s foreign policy is disruptive. There have been bouts of isolationism, protectionism, nationalism, and shifting allies and alliances in America’s history, but the breadth and depth of change in the administration’s first 165 days has been astounding. Disruption may have benefits, but it definitely has costs, and Trump witnessing some of the blowback at the G20 Summit in Hamburg.

Not surprising, Trump is especially unpopular in Europe. In fact, attacking Trump is an essential election strategy in Germany and appreciated by voters in much of the continent. Angela Merkel and Emmanuel Macron are organizing a European position at the summit on global issues of importance to them, such as climate change, trade and the rule of international law, each in contradiction with Trump’s position and perceived preferences. 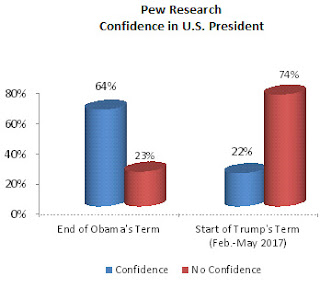 A massive shift of 51 percent in “no confidence” in Donald Trump from the end of Barack Obama’s term in just the first five months of his presidency in a 37-nation survey just published. In G20 allied countries, Trump has especially negative ratings. 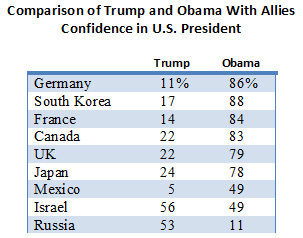 Allies Germany, France, United Kingdom, Japan and South Korea have 50 to 80 point drops in confidence from Obama to Trump. Neighbors Canada and Mexico also don’t have confidence. Mexico wasn’t that high on Obama either. Only in Israel and Russia of the 37 countries tested did Trump receive more public confidence than Obama.

Trump will find that his G7 lectures in June are less welcomed and his policy views on the defense in Hamburg.

The Pew poll also showed America First and the policies it represents are not particularly popular (leaving climate accord – 71% against, withdraw from trade agreements – 72% against, build a wall with Mexico – 76% against). Trump himself is seen as arrogant (75%), intolerant (65%) and dangerous (62%). But, he also is seen as a strong leader (55%) and charismatic (39%),

Trump and Vladimir Putin are close in their confidence rating at the low end, with Putin at 27 percent and Trump at 22 percent.

Although negative public opinion will not necessarily disrupt long-term relationships, allies support and international solidarity will be much harder for the U.S. and President Trump to achieve.
Posted by Floyd Ciruli at 11:34:00 AM