North Korea has Potential for War

North Korea may be the most likely place for the next war to break out. The American people are very concerned, and the Chinese military are ramping up activities along the 800-mile border to prepare for any crisis that might develop.

An ABC News/Washington Post poll shows that 81 percent of Americans consider North Korea as a threat and nearly three-fourths (74%) believe there could be a full-scale war. (July 10-13, 2017)

Fox News reports that more than half (55%) of the public believes military force may be necessary to stop North Korea’s nuclear weapons program. (July 16-18, 2017)

But actually going to war over North Korean weapons has only 51 percent public support and it is mostly through a partisan lens, with Republicans (73%) twice as likely to support war than Democrats (39%). 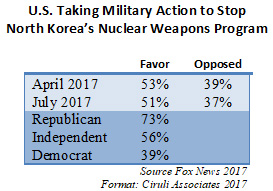 Partisanship also affected the public’s judgement as to President Trump’s ability to handle the crisis. Only 22 percent of the public said they had a “great deal” of trust in Trump handling the crisis, but 40 percent said they had “none at all.” Not surprising, there was major partisan differences, with only 4 percent of Democrats having a “great deal” of confidence in Trump handling a crisis, but 52 percent of Republicans were confident.

However, worry about a war was non-partisan. 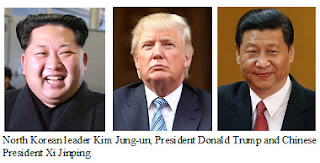