Sunday is an election day in many countries. Last Sunday, Brazilian voters elected a new president, Jair Bolsonaro, called the Donald Trump of the South. In Hesse state, home of Frankfurt, the German financial capital, voters continued to turn away from Angela Merkel, the European anti-Trump, and her ruling center parties and rewarded more left and right parties.

Both elections reflect a trend of voters looking for alternatives to the status quo, empowering parties and personalities recently seen as fringe and promising to disrupt the establishment. Bolsonaro, whose campaign focused on corruption and crime, joins nationalist in Western Europe now ruling in Italy, Hungary and Poland. He’s on the right, but is similar to Mexico’s newly elected president, Andrés Manuel López Obrador, who is on the political left, but was elected as a similar anti-establishment disrupter attacking corruption and promising more security.

Merkel’s political power is gone and her term will end as soon as her coalition can find an alternative that can help them win an election. But, the likely winners in the next German election will be a mélange of parties making assembling a government even harder than it has been for Merkel the last year. 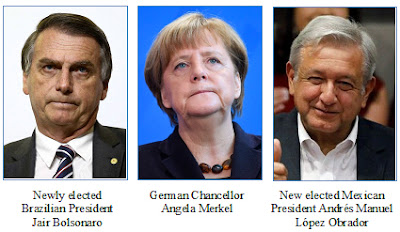