Win or Lose, Trump is Changing the Team

Rumors are rife in D.C. that at least a half dozen cabinet positions will change after the midterm. Most prominently on the departure list is Jeff Sessions, the endlessly disparaged Attorney General.

Changes are also coming to the national security and foreign policy team. Nikki Haley has already announced her departure, and Joseph Dunford, Chair of the Joint Chiefs, is about to leave the position due to the normal rotation.

President Trump appeared to confirm rumors that he had tired of Jim Mattis’ restraints on his many instincts. Trump’s favorite general, who he called “Mad Dog,” a name Mattis doesn’t approve, is now called behind-his-back, “moderate dog.” In Trump’s October 60 Minutes interview, he labeled Mattis “probably a Democrat,” not a term of endearment in the White House. Mattis claims he’s not leaving, but…

Chief of Staff John Kelly’s deputy, Kirstjen Nielsen, who became Secretary of Homeland Security, has a thankless job, and indeed, Trump doesn’t thank her. She’s on the rumor list. Kelly, of course, always looks somewhat uncomfortable in his job. 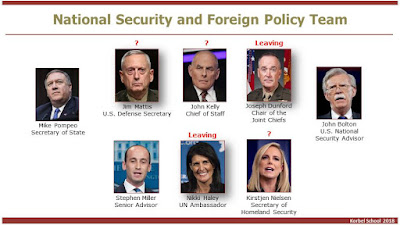