Angela Merkel’s 13 years of leadership of the Federal Republic is coming to a rapid close. Her center party coalition of conservatives and socialists have lost votes to farther right and left extremists in two state elections in the last month. Merkel was forced to announce she wouldn’t stand for election to lead the Christian Democratic Union in December, a party she has led since 2000. She is hoping to hold onto the chancellorship to have time to groom a replacement. The only question now is who can replace her and lead the center-right coalition?

Her demise began quickly at the very moment global media declared her “Woman of the Year,” reflecting her long reign and leadership on EU issues, such as the Greek debt and Syrian refugees. It was Merkel’s border policy in 2015 that most contributed to the unraveling of her coalition.

It is the EU that may suffer the most due to her loss of power. At the moment, the EU is challenged by nationalist governments from Italy to Hungary and the withdrawal of Britain. Merkel’s prestige and Germany’s economic power are most needed. The Brexit process has drained Prime Minister Theresa May’s influence in Britain and Brussels, and France’s Emmanuel Macron barely registers a 30 percent approval due to a continued sluggish French economy and his domestic political missteps. Macron doesn’t lack ambition to lead, but his stark endorsement of the EU’s liberal model of “open borders, open markets and open societies” is unlikely to gain traction in Europe of 2019. 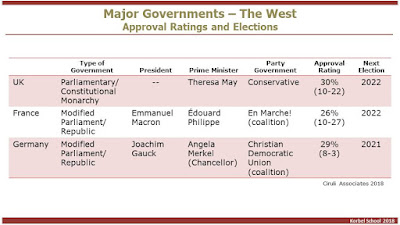