The Korbel School hosted a post-midterm presentation with Ambassador Christopher Hill and Professor Floyd Ciruli to update their analyses after the 2016 election. The presentation described the mixed national results, the end of one-party government in Washington and the extraordinary sweep of Colorado offices by the Democrats. 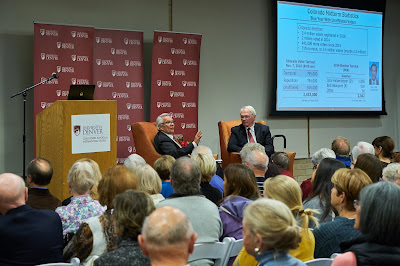 The event, which attracted 150 students, alumni and metro residents, was co-sponsored by the Crossley Center for Public Opinion Research and the Office of Global Engagement. The impact on the administration’s ability to conduct foreign policy due to a Democratic House of Representatives was a focus of discussion. Hill described the Congressional hearing process for a foreign services officer. I suggested that House Democrats now have a mandate to restrain the President and will have to implement it in a fashion that is seen as reasonable by the public.

With the conclusion of the midterms, we both expected the presidential election will now accelerate and controversies surrounding American foreign policy will be one of the issues candidates will have viewpoints on and electorates will expect to hear.