Both small and large donations are flowing into Colorado Democrats’ winnable U.S. Senate race. Expect a lot more. Incumbent Senator Cory Gardner raised more than $2 million, but the Democratic field more than doubled that in total. 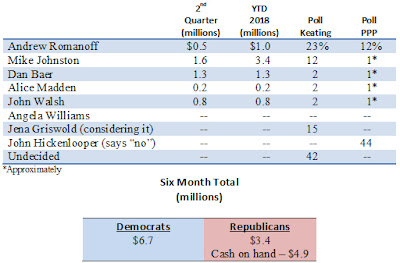 Gardner starts in a strong fundraising position with nearly $5 million in the bank, but Democrats are raising both large contributions, especially Mike Johnston and Dan Baer, and small contributions led by Andrew Romanoff. A recent poll (Keating) has Romanoff in the lead and Johnston third after rumored candidate and newly elected Secretary of State, Jena Griswold. An unreleased Public Policy Poll reported John Hickenlooper would get 44 percent, with Romanoff in a trailing second. The complete poll was not released and it is unclear who authorized the poll.
Posted by Floyd Ciruli at 2:14:00 PM