As President Trump begins his re-election campaign, the latest state-by-state Morning Consult poll of presidential approval shows 12 western states that broke fifty-fifty between Trump and Hillary Clinton in the 2016 presidential race are still evenly divided above and below his national approval rate of 43 percent.

Trump’s approval has been in a narrow range. It declined from a low 46 percent in the polling averages at his inauguration, with no honeymoon, to settling in at the upper 30s and low 40s his entire first two years in office. Gallup reported on June 30, 2019 that his approval was 41 percent, after starting the year at 37 percent, reflecting the December market crash and January shutdown, moving to a high of 47 percent in early May.

The six western states won by Trump were: Arizona, Idaho, Montana, Texas, Utah and Wyoming (in continental U.S. and Texas). Clinton won six: California, Colorado, Nevada, New Mexico, Oregon and Washington. The same six states each are divided today above and below the 43 percent national average.

Arizona and Nevada clearly appear to be battlegrounds due to latest polling and closeness of the 2016 race (3% and 2%, respectively). But, because of Trump’s high negative, Texas appears vulnerable and Utah, which in 2016 voted strongly for a conservative third-party candidate. Just examining approval ratings, makes Colorado a potential Republican target, but the 2018 election and his high disapproval (54%) makes the state look difficult for a Trump revival. 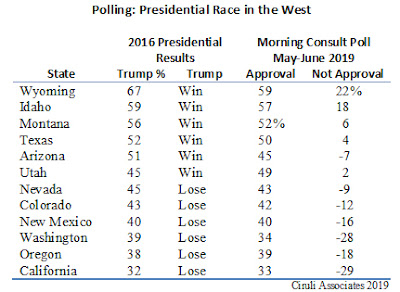