Trump Riding on Economy, But Lagging on Foreign Policy and Personality

Donald Trump hit an approval high in a new ABC News/Washington Post poll of 44 percent (47% among registered voters). Also, his RealClearPolitics average has tied his previous two-year high of 45 percent, set in early May 2019.

Gary Langer, ABC News’ and Washington Post’s well-known pollster, believes the economy is mainly responsible for Trump’s move up. More than half of Americans approve of his job performance with the economy (51%). However, it is in foreign policy that he lags, with only a 40 percent job approval. Unfortunately for Trump, it’s foreign policy where he enjoys the drama and entertainment value and frequently raises his profile, along with expectations from North Korea, China and Iran. 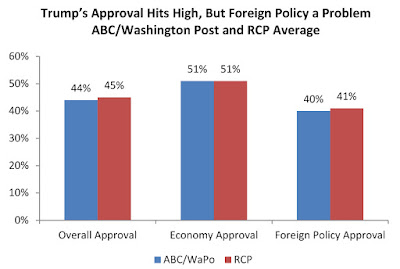 The poll also records Trump’s other liability holding back his approval rating and possibly damaging re-election is his personality. Two-thirds (65%) of Americans say that Trump “has acted in a way that’s unpresidential since taking office,” a viewpoint people have held about Trump during his entire presidency (70% in mid-2017 and early 2018).

Langer makes the point that, along with an approval rating in a very tight range (36% to 44% in the ABC News/Washington post surveys during his entire 900 days in office), it has been extraordinary low. His two and one-half year average is 39 percent, well below Gerald Ford (47% approval), Bill Clinton (51%) and Jimmy Carter (51%), two of whom lost re-election.
Posted by Floyd Ciruli at 2:19:00 PM