Authoritarians Use Virus to Extend Power

Populist demagogues and authoritarians are using the pandemic as an excuse to increase their power and silence critics. The most high-profile head of state seizing dictatorial power due to the coronavirus is Viktor Orbán, prime minister of Hungary and head of nationalist Fidesz Party. The grant of near absolute authority to rule by decree has no clear procedure for relinquishing the power and draconian punishment for anyone who “distorts the truth” about the government’s effort to fight the pandemic or save the economy.

But Orbán is hardly alone as Russia, Turkey, Israel and India are among the countries led by nationalist populists adding to their control. Simultaneously, China and Russia are spreading fake news on social media, especially in Europe, to undermine the unity of the EU. The mostly ominous posts extol the effectiveness of the authoritarians in dealing with the pandemic and claim democratic countries and the EU are failing.

What the authoritarians know and contribute to by their propaganda is the public’s dissatisfaction with democracy and elected officials. In a 2019 Pew poll in 34 of the most significant countries with democratic process, 52 percent of the world’s public said they were dissatisfied with democracy versus 44 percent satisfied. Elected officials did even worse with 64 percent saying officials didn’t care what people like themselves think and half didn’t believe the state was run for the benefit of all. For democracy to survive, it must address these attitudes immediately. Unfortunately, the U.S., which was the world leading advocate for democracy, has relinquished that role. 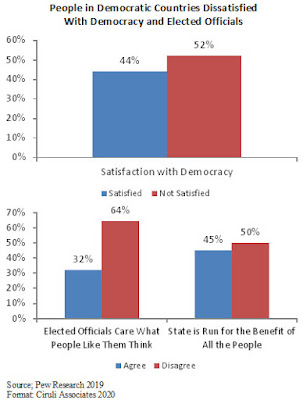