Bernie Sanders, 25 points behind Joe Biden and with no real chance of winning the Democratic nomination since March 3, Super Tuesday, gives it up on April 8. Sanders will stay in the race through the remaining primaries to take his thousand or so delegates to the Democratic Convention (virtual?) to lobby the platform and remain a player. Biden and the party will continue to give Sanders a wide berth, hoping to get a unified party by early September. However, they must guard against appearing too close to his more rigid ideas and supporters. 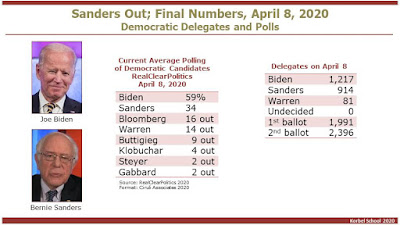 Biden starts the race against President Trump about 7 points ahead in the RealClearPolitics average, but the contest is closer in key states, such as Pennsylvania (up 3 points) and Florida (up 1 point). Most national projections see a close electoral vote fought, especially in 10 to 12 battleground states.

Biden’s challenge is to lead a party that is primarily unified by a desire to defeat Trump, but divided over some of the basic approaches to governing and specific policies.


Read The Buzz:
Biden Moving Toward Delegate Majority. Does Sanders Stay In?
The Resurrection of Joe Biden. What Happened?
Posted by Floyd Ciruli at 12:59:00 PM