The Twin Towers of Pain

What’s unique in the pandemic crisis of 2020 is the speed and intensity of the onslaught. From the first reported death in the U.S. on January 29 in Washington State, to 3,800 at the end of March, to 22,000 recorded Easter weekend, the U.S. now has the highest numbers of deaths, going past Italy, which has just under 20,000. Represented in the bar chart below, the tower dramatizes the more than 500 percent increase in deaths since April 1.

Unemployment, as measured by claims, shows a similar speed and impact. From a recent historic low of 3.5 percent and about 200,000 new claims per weekly reporting period, to 3 million on March 21 as many states and cities implemented lock downs, to 6.8 million the next week ending March 25, to 6.6 million more the following week, for a total of 16.6 million claims (second bar chart). The largest number of claims in a single reporting period in the Great Recession was 695,000, which was after a year into the crisis. Total unemployment reached 10 percent and 15 million. The expectation for pain is greater for the coronavirus pandemic. 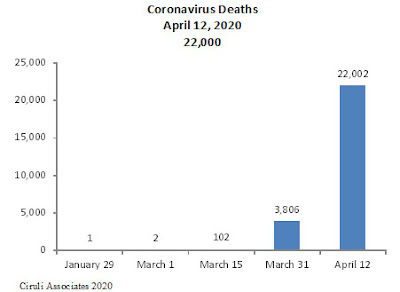 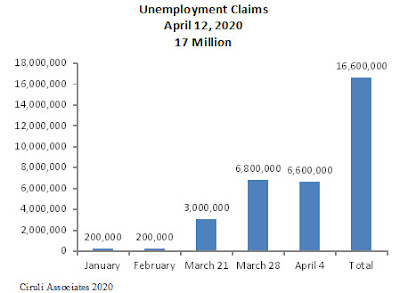