In his first press conference, President Joe Biden doubled his initial commitment to vaccinate 100 million Americans in his first 100 days in office. Both the supply and the rate of vaccinations (2 million per day) have increased sufficiently in the last ten weeks to make the goal doable. As of the end of March, 71 percent of adults over the age of 65 have received one shot.

Although infections, hospitalizations and deaths have slowed, they are still substantial. In the last month, the U.S. and Brazil were the two countries logging in more fatalities, with 50,000 in the U.S. and 60,000 in Brazil. The two countries continue to lead the world in total deaths. A new entrant into the list of top seven nations for deaths is Russia (97,000), just passing France. 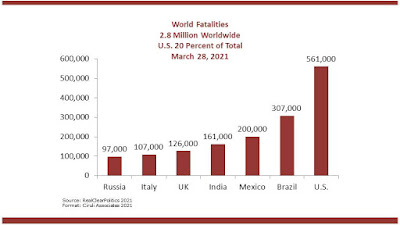 In a powerful new CNN documentary by Dr. Sanjay Gupta, CNN’s medical correspondent, Dr. Deborah Birx offers the view that the number of U.S. deaths could have been substantially reduced if the lessons from the surge in April had been universally applied by states and cities as they faced later surges.

The Biden administration and its medical advisors continue to be worried that many states and locals are easing up on restrictions too quickly. Also, there is considerable concern about anti-vaccine messaging. Upwards of a third of Republicans claim they won’t take the shot.