At the beginning of the Donald Trump presidency, Japanese Prime Minister Abe worked quickly and energetically to befriend him. He helped provide stability for Japan in a highly disruptive presidency. Even more importantly for Japan’s position in the Biden presidency, Abe became the advocate and architect for liberal internationalism in Asia. From helping construct a successor to the abandoned TPP, to describing a free and open Indo-Pacific as an aspiration, Abe and Japan were filling in for an absent America. 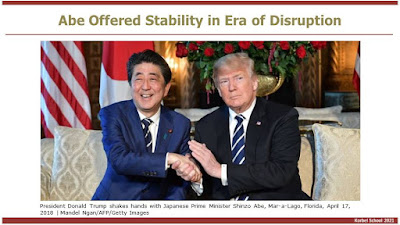 Of course, being only miles from China, Japan is a frontline country in the new region of maximum competition and possible conflict. It appreciates America’s deterrent. But for America, they are also an essential ally to build the coalition that will resist China’s new foreign policy expansion, including in the East China Sea where the two countries have competing claims.

America is anxious to see improvements in Japan’s relationship with South Korea and, of course, an increase in its defense capability, both legally and in resources.