The first trip abroad of the American Secretaries of State and Defense were to their counterparts in Japan. Japanese Foreign Minister Motegi said on March 16 the “free and open international order is greatly challenged by attempts to change the status quo by force and progress of authoritarian system.” Secretary Blinken agreed: “China uses coercion and aggression to systemically erode autonomy in Hong Kong, undercut democracy in Taiwan, abuse human rights in Xinjiang and Tibet, and assert maritime claims in the South China Sea that violate international law.”

Although Japan has been a U.S. ally for decades, it is now the country the U.S. is forging a special relationship with as Asia becomes the primary foreign policy theater and China the focus of its attention. Demonstrating the heightened attention is that Prime Minister Suga will be the first top foreign leader to visit the White House.

During the Trump presidency, due to Shinzo Abe’s personalized outreach, Japan avoided much of the disruption rained on other U.S. allies. Japan’s concerns about China are well-established and now mirror those of the U.S. Japan under Abe promoted the Indo-Pacific as a strategic concept and created a replacement trade structure for the failed TPP. In fact, Japan’s reputation in South East Asia is better than the U.S. President Joe Biden and Blinken will push for some reconciliation with South Korea and an increase in defense spending. But as of now, Japan is first in Asia for America’s attention. 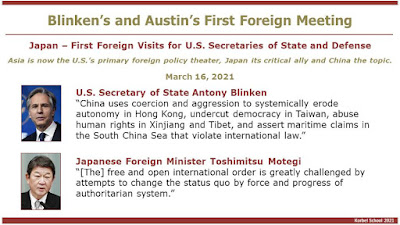