Interest groups and activists put seven major initiatives on the ballot for voters to decide on in the November 2016 election. More than $50 million was spent on advertising and ground games achieving a 71 percent success rate (5 out of 7 passed).

At the end of October, a DU/Crossley Center poll was released that identified the five likely winners and two losers. At the top of the list of popular proposals was giving people a right to die under specific circumstances and shifting the Colorado presidential nominating process from a caucus/convention system to a primary in which unaffiliated voters can participate.

Members of both parties and unaffiliated voters supported both propositions. 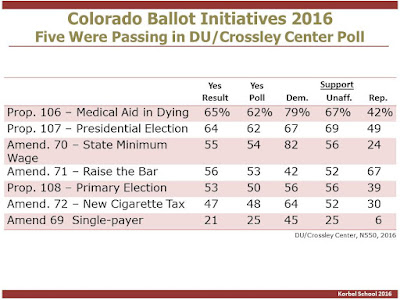 The least popular proposal was the single-payer health care initiative placed on the ballot by fans of Democratic presidential candidate, Bernie Sanders. It should serve as a warning concerning the popularity of many solutions that can be labeled expensive and big government. It was never ahead in the polls and could not command a majority of Democrats.

More of a surprise was the defeat of the $2.50 cigarette tax measure, which started with more support than opposition in early polls, but faded after a withering advertising campaign ($20 million) questioned where the money collected by the tax would go. Taxpayer frugality overcame the usual voter support for sin taxes, especially related to cigarettes.

Proponents of the minimum wage had resistance from Republicans and had to work hard to get 57 percent support. Typically, minimum wage increases get voter support, and Colorado passed a less expensive version in 2006. The initiative had union and out-of-state support.

Two initiatives related to unaffiliated voters and limiting constitutional amendments were less popular and required campaigns to bolster their support. Both were complicated in their intent and effect and had higher levels of undecided voters late in the campaign.

The University of Denver/Crossley Center for Public Opinion Research survey was conducted by live interview telephone calls with 550 likely Colorado voters. The survey was in field from October 29-31, 2016 by Floyd Ciruli, Director of the Crossley Center. The sample was selected by random probability design from a list of registered voters from the Colorado Secretary of State and included 258 landlines and 286 cell phone respondents. The data was weighted based on likely voter statistics for age and ethnicity. Overall, the survey’s margin of error is plus or minus 4.2 percentage points. The margin of error for subgroups is larger.
Posted by Floyd Ciruli at 10:57:00 AM