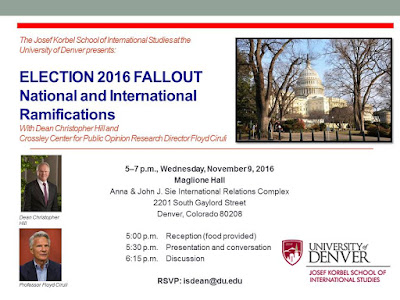 Dean Christopher Hill and professor and pollster, Floyd Ciruli, will analyze the election results and the effect of politics and policy of the U.S.
Join the discussion on November 9 at Maglione Hall in the new Sie wing of the Korbel School on the DU campus (2201 S. Gaylord St., Ste 4005) from 5-7 pm. Food provided. RSVP to isdean@du.edu.