In a pre-election statewide survey, Colorado voters were asked their priorities in terms of foreign policy. “Strengthen our alliances with other countries” (60% top priority) and “address the immigration system” (60%) were tied for their top priority in the University of Denver/Crossley Center survey conducted in late October.

Clustered in a secondary position among the five issues tested were climate change (47%), a military build-up (45%) and “action” related to rivals, such as Russia, China and Iran (44%). 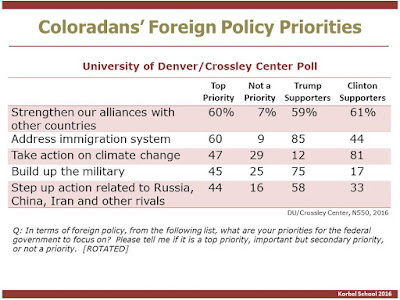 There were some dramatic differences among Donald Trump and Hillary Clinton supporters that will be relevant given the president-elect’s preferences and administration team now being assembled.

Both camps want to strengthen the alliance system, but Trump supporters are interested in being more active with rivals, including Russia, than Clinton supporters. In both of these areas, Trump is somewhat out of step with his base.

The question on immigration was worded in a neutral fashion. It asked the priority preference for “addressing” the system. It was the top priority for Trump supporters (85%), but of less interest for Clinton supporters (44%), which was possibly a reflection of the difference in preferred solutions; i.e., “wall and deportation” vs. “path to citizenship.” Trump supporters expect and want something done whereas Clinton supporters rate it a lesser priority and are concerned as to what that solution will be.

The University of Denver/Crossley Center for Public Opinion Research survey was conducted by live interview telephone calls with 550 likely Colorado voters. The survey was in field from October 29-31, 2016 by Floyd Ciruli, Director of the Crossley Center. The sample was selected by random probability design from a list of registered voters from the Colorado Secretary of State and included 258 landlines and 286 cell phone respondents. The data was weighted based on likely voter statistics for age and ethnicity. Overall, the survey’s margin of error is plus or minus 4.2 percentage points. The margin of error for subgroups is larger.
Posted by Floyd Ciruli at 2:44:00 PM