A group of graduate students in a public opinion and foreign policy class at the Korbel School at DU made their election selection.

All of them believe Hillary Clinton will win. The majority believe the vote will be close. Sixty-seven percent believe it will be less than what Romney won by in 2012 (he won by about 4 million votes). One student saw a landslide. 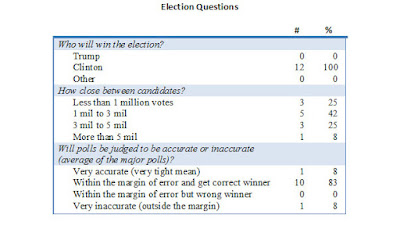 And they believe (83%) that major polling averages (i.e., leading aggregators) will get the correct winner and be within the margin of error. One student thought they would be wildly off and one said they would be spot on. In my view, a very reasonable assessment of the status of the polls. November 8 will confirm or correct.
Posted by Floyd Ciruli at 9:27:00 AM