A Promise Trump and Ryan Need to Deliver

Donald Trump and Paul Ryan are in deep trouble. Health care repeal and replace is a promise that must be delivered. Much of their support is based on the belief they can deliver certain key promises. And critically for their power, the business community has ignored the distracting tweets and out of mainstream views in hopes tax reform, infrastructure spending and deregulation would be the upside for tolerance.

Health care reform was not the corporate and business crowds’ top priority. It was forced front and center by the Republican political leadership as long promised and doable given the repeated overwhelming votes to repeal in the House since 2011.

Trump changed the game. He insisted that the popular aspects of the program stay in place and that repeal and replace pass at once. He was operating as a politician, not an ideologue. But the Republican Party has a surfeit of health care ideologues: Tea Party, Freedom Caucus and Rand Paul Libertarians who do not believe in any health entitlements and resist subsidies for the poor. They want to replace Obamacare and then pass some market-oriented measures that are likely to leave many gaps and many sympathetic stories of citizens left bereft of support. Many of them will be Trump voters.

If the gridlock of the last six years now continues with Republicans in total control, the raison d’être of the Trump administration and Republican majority begins to crumble.

As pointed out in recent blog, Absence Makes the Heart Grow Fonder, Obamacare has grown more popular as it appears threatened and President Obama is no longer the chief defender of it. Recent polling associated with Obamacare show that the Freedom Caucus and Tea Party viewpoint of no right to health care and no subsidy for the poor are narrowly held positions among the public.

The public supports Trump’s and Ryan’s view that a replacement plan must accompany the repeal. They also believe insurance must be affordable. 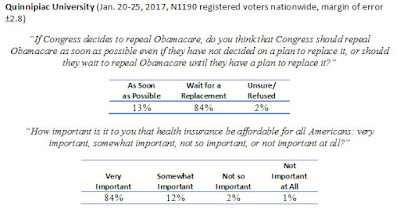 The public in general believe there is a “right” to health care.  The view that government is responsible for it has grown in recent years.