Russia and Vladimir Putin are now toxic in Washington, D.C. Even having a conversation with the Russian ambassador can get a person fired (Michael Flynn) or recused (Jeff Sessions). That was hardly the plan on Election Night when Putin and his entourage were reportedly toasting the result with champagne.

Putin’s aggressive propaganda campaign continues most of the old Cold War techniques, but adds cyber warfare against Western democracies and especially the U.S. election. The motivation appeared to help remove a political irritant, Hillary Clinton, and assist a friendly Donald Trump, who was disinterested in Russian ambitions in Eastern Europe, the future of the EU or NATO, the removal of Bashar al-Assad and human rights issues in general. A tertiary benefit was undermining confidence in American democracy.

But, unfortunately for Putin, he and Russia have become pariahs in Washington. Even normal diplomacy is now disrupted. Both Putin and Russia are at all-time lows in public opinion, which will help their opponents to continue and extend sanctions and spend prodigious amounts on defense, much of it aimed at Russia And, of course, there are new multiple investigations of Trump’s Russian connections, plus the cabinet and NSC appointments do not bode well for a thaw in U.S.-Russian relations.

Putin is giving a modern update to the definition of Pyrrhic victory. 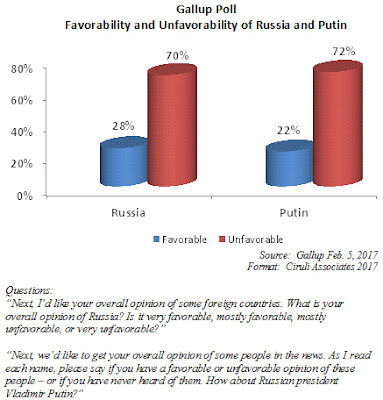 Read: Politico: Russian investigations a “witch hunt”? Not according to polls
Posted by Floyd Ciruli at 12:51:00 PM