Democrats’ weaknesses in the interior of the country will be on full display in the 2018 election. They would like to pick up the three senate seats they missed in 2018 (would have needed 2 if Clinton/Keane had won) to control the Senate. But out of the 33 seats up, they must defend 25 (including their 2 independents) and many are in the heartland where Donald Trump did well.

Republicans have only one seat out of 8 in a state Hillary Clinton won – Nevada and Democrats will target it. Democrats will also challenge Jeff Flake, who only won with 49 percent in the 2012 race, but it will still be difficult for them to win Arizona (Trump carried it by 4 points). They will likely take on Ted Cruz in Texas, another difficult win, but they hope he’s vulnerable with his endless shifting position on Trump and changes in the state’s demographics.

But Republican opportunities are huge. Democrats will be defending highly vulnerable seats won in President Obama’s 2012 re-election. Five of those states were carried by Mitt Romney that year. Last year, Donald Trump won them and the Republicans will target them. 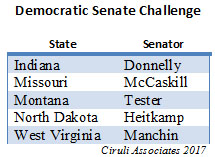 Also, a few states Trump won (but not Romney) will be put on the target list, including Florida (Nelson), Ohio (Brown), Pennsylvania (Casey), Wisconsin (Baldwin) and Michigan (Stabenow).

Obviously, Trump’s popularity will be a factor, but if he holds his base and most Republicans, Democrats will be playing more defense than offense in these senate seats. The Democratic Party’s Beltway leadership and messaging has not been appealing to a majority of voters in the states with vulnerable senators. Will the Democrats move off the coasts and out of the big cities to challenge Republicans with the working class voters in rural areas and smaller towns or have these senators?